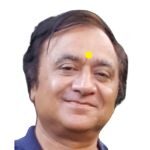 Based out of Mumbai , he is Celebrity Astrologer having more than 20 years experience in Vedic Astrology & Reiki Healing techniques. Regularly visits Hidamba in Manali to enhance his reiki techniques. Speaks English & Hindi. Click Here to Book a Phone Consultation.

Pisces is a mutable water sign ruled by Jupiter. Mercury is an earthy planet which shares a neutral relationship with Jupiter, which is inimical towards it. Though Mercury is debilitated in Mercury, this placement is still considered average since Mercury and Jupiter are benefic in nature. Mercury in Pisces natives are blessed with a very creative imagination. They are very sensitive and tend to get hurt easily. They tend to view everything with rose-tinted glasses and tend to see good in everything.  These natives will trust others easily and quickly.

Mercury in Pisces natives are gentle and polite souls who are compassionate towards other beings. Their overly accommodative nature can be the cause of much sadness in their lives since this makes them vulnerable to deception, treachery and disloyalty in the matters of business and love relationships. They have a strong inclination for arts and everything beautiful. They can be best painters, gifted singers, brilliant musicians and exceptional dancers. These natives tend to be dreamers who are always lost in the world of imagination. These natives have amazing telepathic abilities. Hence, they would rather express themselves through poetry or other fine arts instead of talking.

According to the principles of Vedic Astrology, Mercury in Pisces natives tend to be highly imaginative and express themselves in a unique manner which is sometimes hard to understand for the average person. Since Jupiter rules higher intelligence and spiritual wisdom, these natives tend to express their ideas in very spiritual and imaginative way. Pisces is a sign which indicates spirituality and a highly active subconscious mind which blesses its natives with highly abstract thoughts which are quite difficult to understand. Mercury is an earthy planet which signifies intelligence and realistic communication. Its analytical and logical capabilities cannot be expressed naturally in this combination. Hence, Mercury becomes weakened or debilitated in this combination. A dignified Jupiter will help the natives to perform well in the fields that require the use of creative and imaginative faculties.

Mercury in Pisces natives may face frequent obstacles due to their mindset which is not easily accepted by others. They have to handle and overcome opposition and work hard in order to become recognized in their respective fields. Their way of communication and expression is often difficult to understand since there won’t be any logical basis to what they are saying. Since Mercury as a planet of communication is naturally weakened in this placement, their way of interaction is suppressed. When they are involved in arguments or debates, they tend to jump into conclusions rather than finding a way to explain by using reason and logic. However, a dignified Jupiter bestows its natives with higher wisdom which helps them to support their unconventional ideas and opinions.

Since Mercury is debilitated in this placement, these natives can generate various tricks to deceive others for their own benefit and later act as innocent. These natives can generate material benefits through devious schemes since Mercury is the planet of merchants. If these natives become entrepreneurs, then they will be naturally inclined towards earning income and wealth through illegal means and methods. However, if Jupiter is dignified and strong, then these natives will be endowed with righteousness and faith in divine which will prevent them from getting involved in any frauds, scams or any illegal means of earning wealth.

Mercury in Pisces natives are sensitive to criticisms from others. They also tend to carry grudges for a long period of time and exact revenge in a very secretive and hidden manner. A dignified Jupiter can help them to stay away from troubles or disputes. It is highly advised for these natives to stay away from troubles, arguments or debates since it hard for them to state their arguments clearly and convincingly.

Mercury in Pisces natives tend to have unrealistic hopes, blind faith and irrational optimism. Hence, they will find it hard to analyse clearly and tend to stay positive and optimistic which can put them in danger to execute unreasonable decisions. This also indicates that other people can easily manipulate and take advantage of these natives rather easily. Ancient scriptures of Vedic Astrology also state clearly that even though these natives can be easily fooled or cheated, a strong Jupiter, the planet of righteousness secretly protects these natives. It means that anyone who abuses these natives or make fun of them will be punished sooner or later.

Pisces being the 12th sign of the Zodiac indicates travel to foreign lands. Hence, these natives love frequent travelling where they can energize themselves and gather the much-needed spiritual inspiration. It is said that more these natives travel, the more successful they become. Since Jupiter is the planet of righteousness, these natives tend to be noble and kind. Their way of speech radiates the truth and ethics in life. They will often find refuge in morals and will do activities that are right and ethical.